SmartWebReviews is supported by its audience. When you purchase through links on our site, we may earn an affiliate commission 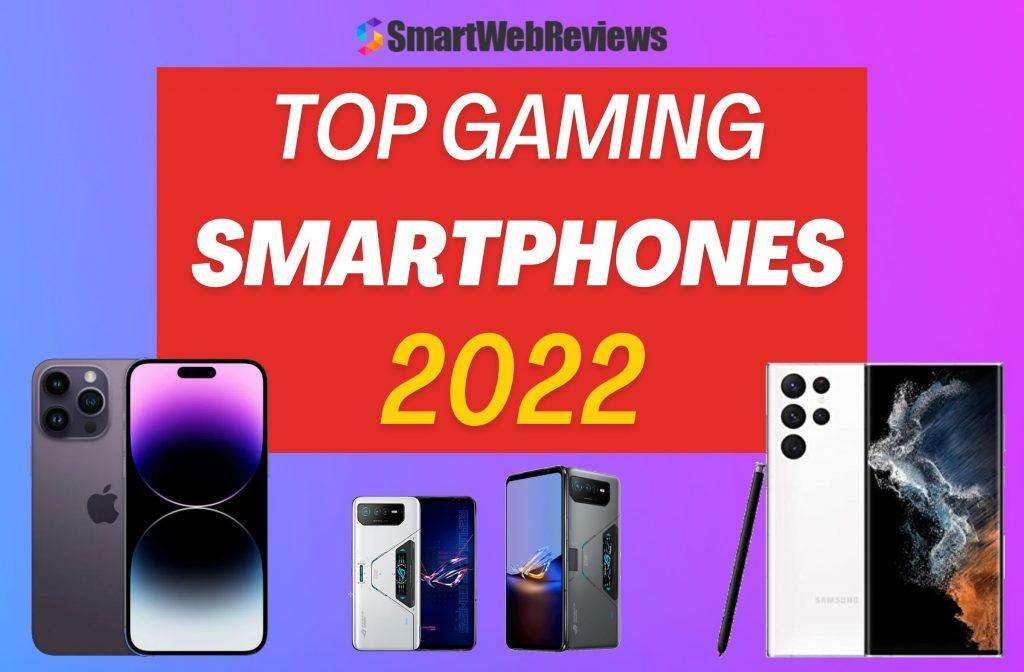 The list includes both phones designed specifically for mobile games and some phones that are not so specialized but still perform well.

To ensure that these phones deliver optimal gaming performance for their respective categories, every one of them has been benchmarked and tested in real-world environments.

Whether you want a phone that plays video games or does more, you should check out our list of the best phones. Take a look at our best mid-range phones and best cheap phones articles for a selection of less expensive handsets.

If you take a look at the specifications, you’ll quickly understand why we think the Asus ROG Phone 6 Pro is the best gaming phone around.

As a result of its screen’s refresh rate of 165Hz and touch sampling rate of 720Hz, and its Snapdragon 8 Plus Gen 1 processor paired with 18GB of RAM, this device was designed to deliver exceptional gaming performance, and we are glad to report that it does exactly that.

We have never seen such a strong gaming performance on a phone, and its 6000mAh battery ensures that you won’t be interrupted during your sessions. Plus, with 65W fast-charging, you can recharge it in just 40 minutes and be ready to go right away.

It’s the best handset we’ve tested for gamers with a limitless wallet – and a constant appetite for gaming.

This list will be updated once we have completed testing with the new Asus ROG Phone 6D Ultimate with a MediaTek chipset.

The average person doesn’t have a lot of money to spend on a phone, especially if it’s just a secondary device for gaming. In this case, a device like the Redmagic 7S Pro can help. Although it’s less expensive than the flagships on this list, it still delivers blistering performance.

With its 120Hz refresh rate, 960Hz touch sampling rate, and 1080p resolution, this 6.8-inch display makes an excellent gaming canvas. We sometimes had to turn it up to maximum brightness even indoors since it’s not as bright as some of its competitors. In addition to the 520Hz touch buttons, you’ll have a real competitive edge with the design’s unmistakably gaming-centric features.

Nevertheless, Nubia’s user interface is clunky and cluttered, and there are even some translation errors to be found, which makes it difficult to enjoy it. In spite of this flaw (as well as the poor camera), you’ve got a highly capable gaming phone if you can overlook them.

These two previous entries are dedicated gaming phones, designed for only that purpose, while this one is a flagship smartphone that boasts excellent gaming performance as well as many other impressive features. With this device, you can play all the best games in style – but you’ll also get a lot more.

Aside from its excellent gaming capabilities, it is also among the speediest Android phones out there. It has a superb screen, which is one of the best on any smartphone available, which truly makes gaming a pleasure.

In addition to some purist gaming features, such as shoulder trigger buttons, you will also get some advantages that other gaming phones don’t, including a guaranteed five-year warranty on software updates and a camera system that excels in terms of zooming capability compared to the others.

Samsung Galaxy S22 Ultra is an excellent Android device for those looking for a game-playing device with plenty of features.

It proved comfortable capable of playing any title we threw at the A16 Bionic chipset at the heart of the iPhone 14 Pro in our testing.

The App Store and Apple Arcade both have a fantastic collection of titles, which when combined with ProMotion’s 120Hz display makes for a true gaming champion.

It’s important to note that you don’t get the more gaming-specific features other phones on this list have. You don’t get built-in triggers or RGB lighting on the ROG Phone. You can also stream games from Game Pass on iOS, but it’s more finicky.

In addition to its great camera, top-notch software and one of the best screens we’ve reviewed, this phone delivers great performance in other areas.

The Poco X4 Pro 5G is especially recommended for this task. Its 120Hz refresh rate, HDR10 support, and 1200 nits peak brightness make this screen highly advanced despite its sub-/£300 price tag. In addition, the battery will last up to two days in conservative use. Performance standards aren’t as good as flagship models, but they’ll be more than enough to handle your gaming sessions.

Those who love to game but can’t afford the most expensive options in this category may want to take a look at this affordable handset.

It is no secret that the Asus ROG Phone 6 Pro is the best gaming phone on this list, but if you wish to try something different or simply cannot find it, the Asus ROG Phone 6D Ultimate is a good alternative. The reason is that it is virtually the same device.

A major difference is the fact that the MediaTek Dimensity 9000+ chipset is used instead of Qualcomm’s latest, but the performance still remains exceptional. This version scored slightly higher on our CPU benchmarking tests, while our GPU scores were a bit lower. It doesn’t matter what kind of handset you get, you’ll always have enough processing power to handle any kind of mobile game.

While the design is quite similar to its sibling, it’s much heavier to handle on a day-to-day basis. However, the Space Grey finish is much more subtle than white. While the battery and screen are still the same, we didn’t notice any substantial differences during the review process, and we also noticed no significant differences between the two during the review process.

Like the ROG Phone 6 Pro, this phone offers excellent performance and is perfect if you love gaming on the go.

The Asus ROG Phone 6 Pro is the best gaming phone you’ll find on this list, but you can also find the Asus ROG Phone 6D Ultimate if you’re looking for something a little different, or cannot find it. There’s no difference between the two devices, so it’s virtually the same.

Unlike Qualcomm’s latest, this handset comes with a MediaTek Dimensity 9000+ chipset, and it still packs a punch when it comes to performance. In our tests, this version achieved slightly better CPU benchmarking results, but the GPU scores were a little lower. You’ll be able to play any mobile game you want on any handset, since you have excellent processing power.

While the design is similar to its sibling’s, the Space Grey finish is a little more subtle than the white of the 6 Pro and is once again rather heavy to carry around on a regular basis. There are still no significant differences between the two screens or cameras during our review process, and the battery also has the same massive capacity of 6000mAh.

With this handset you can’t go wrong if you’re an avid mobile gamer and want great performance.