Anyone looking for a headset with a modern look should consider the Logitech Zone Vibe 100. 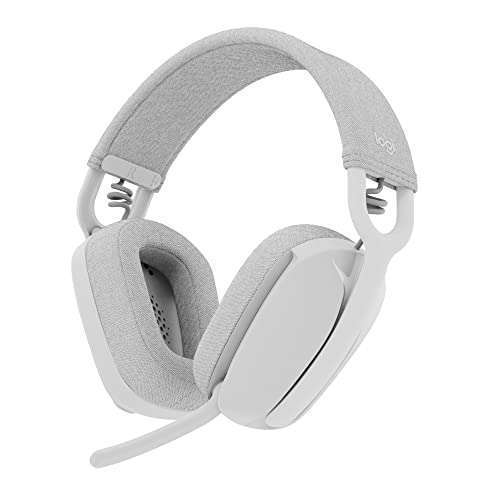 With its sleek keyboards, silent mice, and stylish headsets, Logitech offers a wide selection of peripherals. Their latest headset, the Logitech Zone Vibe 100, is especially designed for conferencing and enters back into the world of business peripherals. If you spend a lot of time in meetings, do you think it’s worth your time? Here’s what you need to know about this device.

With the Logitech Zone Vibe 100, Logitech has created a headset that fits well into a forward-thinking, sleek office or home office environment. Logitech’s target market seems to be perfectly suited to this headset.

There is also an off-white and rose-peach colour option available for the Zone Vibe 100, both of which appear equally attractive in press photographs I’ve seen. I really like seeing headsets that aren’t just black these days.

Although Logitech’s conferencing headset lacks the weird fabric bungee adjustable headband of its gaming headsets, the overall shape and feel of the headsets make it look like they took inspiration from the G535 Lightspeed gaming headset.

The Logitech headband is made of a thin piece of fabric that does not provide any real clamping force, but rather rests on your head. I didn’t experience any wobbly or feeling like it was going to fall off my head at any time during testing, but a light clamping force can offer some reassurance. As the headband slides out of position, it does tend to move on your head as it adjusts, even though it has a decent amount of adjustment scope.

There is decent noise isolation provided by the fabric padding, but it is much more comfortable on the earcups than on the thin headband. It is also lightweight (as evidenced by its 185g weight) and easy to sling into a bag if you decide to work somewhere else rather than in the office thanks to its grey plastic and fabric construction.

It comes with only one mode of connectivity, Bluetooth, with the Zone Vibe 100. While pairing is easy and handy, the lack of USB connectivity in this headset lineup may be a sore miss, but that feature is reserved for the more expensive Vibe 125. In addition to Bluetooth connectivity, you can also connect the Vibe 100 to a variety of devices, including laptops, smartphones, desktop computers, tablets, and so on.

With Logi Tune, you can enable EQs and adjust mic sidetone, run diagnostics, and update firmware as well as perform basic customisation and configuration options. In contrast to being its own separate windowed application, the Vibe 100’s software is contained within a sidebar menu, which is interesting. There may not be much, but what is there is useful.

Logitech Zone Vibe 100 has decent audio out-of-the-box for music and gaming. Despite the fact that there is quite a bit of mid-range, which is handy since it’s where most of musical audio lives, at times the bottom end does feel a bit lost.

The Zone Vibe 100 does have a little sparkly top end, which makes it a pleasant listen on most things. Rush’s Working Man disappointed me with its lack of low end rumble and oomph.

This headset’s purpose is to be used for meetings and calls, so how it handles music and games is a bit less important. As a result, when listening to the new Arctic Monkeys, in video meetings, or listening to podcasts and audiobooks throughout the day, vocals and voices sounded good. It sounds good for its intended purpose.

This microphone offers some decent clarity and some body, although at times it can sound a little thin, since it is a flip to mute candidate. I tested it with friends via Discord, who noted that it sounded pretty good, and I think it sounds similar to gaming headsets that are much more expensive.

Having stereo output instead of mono is also a nice plus, but if your main objective is recording/streaming, you might be better off with a simpler standalone USB mic. If you need XLR, you might need to select a more expensive model.

Logitech Zone Vibe 100 – Does it seem worth buying?

It’s important for you to have a headset that looks modern:

Anyone looking for a headset with a modern look should consider the Logitech Zone Vibe 100.

Here’s what you need:

A Logitech Zone Vibe headset can feel loose due to its lack of clamping force.

Logitech’s Zone Vibe 100 might better be described as a Ronseal product – it does what it says on the tin. for calls and meetings, it will provide solid audio (even if the bass is lacking at times) and a clear microphone. Despite its lack of a clamping force, it is also lightweight and stylish, with a grey plastic and fabric construction. The Logitech Zone Vibe 100 costs £109.99, which isn’t exactly cheap considering that there are cheaper wireless gaming headsets available on the market. But it’s designed for a very different purpose, and for that use case, it’s quite good.